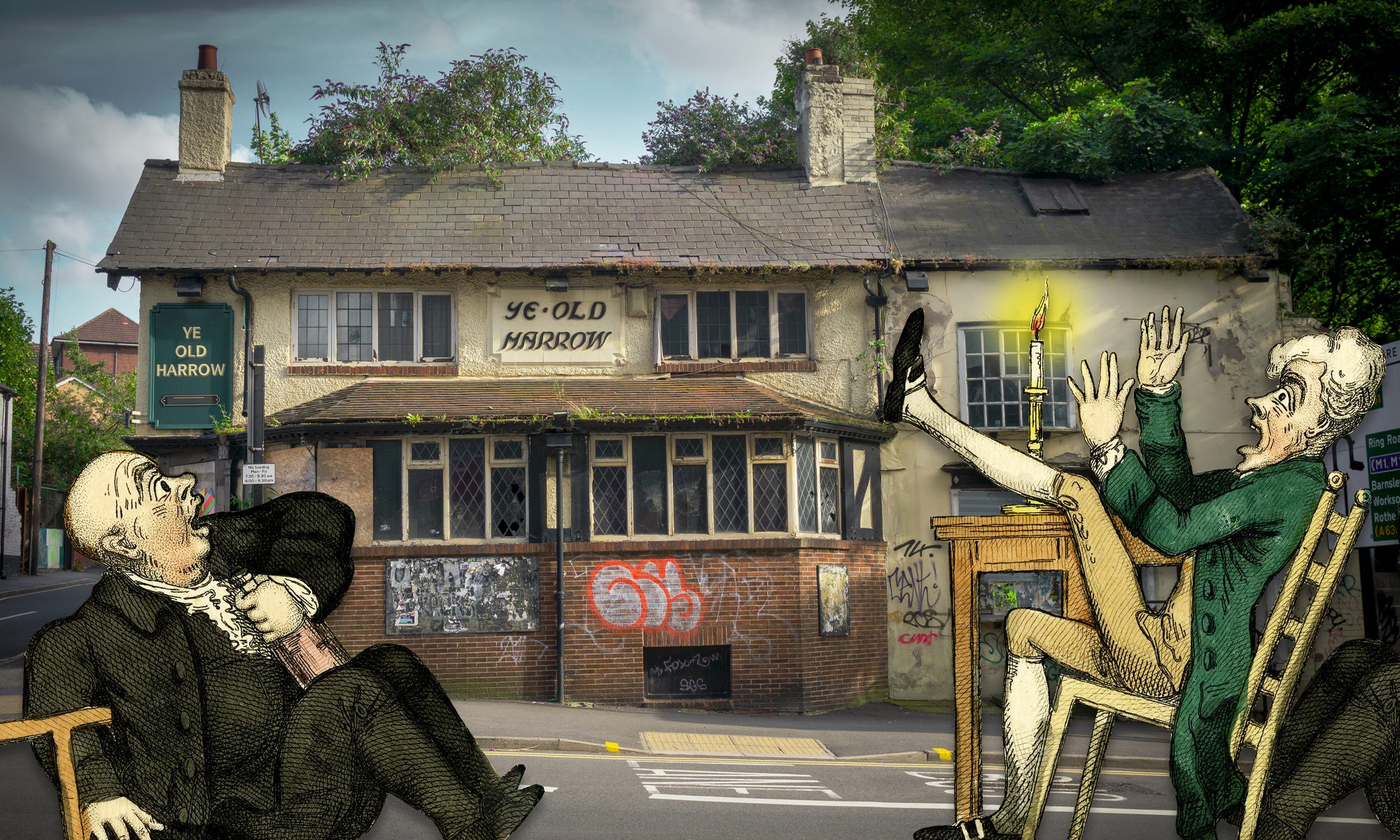 Firstly, there are long-standing material associations between intoxicating spaces and the spectral. Haunted pubs, along with the haunted stately home, form what Roger Clarke has termed one of the ‘twin polarities’ of the British landscape eerie; every village, town, and city has at least one, resident phantoms and poltergeists are used as marketing tools by the drinks industry, and while generally a twentieth-century conceit they are sometimes fleetingly glimpsed in the historical record, like this unusual and unsettling case of a ‘spirit in green colour’ who appeared to a maid at a Manchester inn in 1662. Inns, taverns, coffeehouses, and alehouses were also primary locales for the telling of ghost stories, while historical proprietors were quick to capitalise on celebrated hauntings in their vicinities, like the eighteenth-century Smithfield publicans who (according to Horace Walpole) ‘ma[d]e fortunes’ from the crowds who flocked to see the controversial Cock Lane ghost in 1762.

Even more interesting are the mental and imaginative affiliations. A long (although extremely problematic) historiographical tradition emphasises the ability of psychoactive plants like jimsonweed, henbane, mandrake, and belladonna to trigger supernatural visions and experiences, especially in the context of the European witch trials. Then there are the telling linguistic overlaps, such as the double meaning of ‘spirit’ – the disembodied soul of a deceased person as well as a potent alcoholic liquid obtained by distillation – or the frequent use of spectral metaphors in accounts of disordered or habitual consumption, like the ubiquitous ‘alehouse haunter’ of the sixteenth and seventeenth centuries, or the ‘drug fiends’ and ‘hungry ghosts’ of a later era. As Jayson Althofer and Brian Musgrove have recently argued, such vocabularies cast addicts as abject lost souls whose free wills and autonomous human identities have been subsumed and voided by their substances of choice, turning them into a species of living dead. Finding a natural terminus in the hallucinations and night terrors of narcotic withdrawal, these understandings are also reflected in early modern descriptions of individuals being ‘overseen’, ‘overtaken’, or ‘disguised’ with intoxicants, especially alcohol, and in the use of gothic literary conventions to structure many modern drug memoirs.

Time doesn’t permit a full exploration of these themes, or how they relate to the spatial focus of the project and its urban landscapes (especially through the concepts and practices of hauntology and psychogeography), but to mark Halloween here’s a selection of eighteenth-century graphic satires from the British Museum – found during research for our online exhibition – which depict the relationship between intoxicants and ghosts in historical sites and spaces an especially vivid way. Read on if you dare…

The things-that-go-bump-in-the-beer-cellar motif beloved of many modern publicans is given an early outing in this 1792 etching by Richard Newton, called ‘The Haunted Cellar’; in this case it was a false alarm, the noise that alerted the frightened figures being caused by a blameless owl (elsewhere, drunk gardeners were the culprit). Newton, who seems to have been drawn to macabre and supernatural themes, died of typhus in 1797 aged just 21.

This early nineteenth-century etching by John Jenkins shows a pharmacist, sitting in his shop and surrounded by the accoutrements of his trade, being confronted by the vengeful and vial-wielding ghost of what is presumably a disgruntled ex-customer. His hair stands on end as he quotes Macbeth.

A drinking company in a parlour are startled by a ghost brandishing a poker in this 1789 etching by John Pettit; one clutches the bottle of wine or brandy, while another disappears up the chimney. The decidedly flesh-and-blood hand and what seems to be crudely fashioned mask suggest that, Scooby Doo-like, this apparition is a human in disguise.

A broadcloth weaver finds the seated ghost of an elderly man in his kitchen in this 1816 etching by George Cruikshank, which illustrates a broadside called ‘The Appearance of an Apparition’. The ghost clutches a snuff box, while drinking accoutrements and teawares are arranged on the mantelpiece. Cruikshank, a borderline alcoholic who converted enthusiastically to the temperance movement in the 1840s, was one of the most skilful and soulful chroniclers of the intoxicating spaces of the early nineteenth century.

We return to a haunted cellar in this 1794 etching, again by Richard Newton; this time the intoxicant is wine, the grimacing and goggling witnesses are naval officers, and the ghost is a medieval knight in a suit of armour. As Owen Davies has argued, ‘enlightened’ ghosts are predominantly ‘all in the mind’, and the punning caption here – ‘One Too Many’ – hints that this spectre is a collective hallucination brought on by too much of the grape.

The theme is given a political twist in this 1799 etching by the great caricaturist James Gillray, in which the Prince of Wales (the future George IV) – in a drunken stupor and surrounded by spilt and empty bottles – is visited by the ghost of his great-uncle, who is naked and holds aloft a cautionary hour glass. The former was notorious for his heavy drinking, while the admonishing ghosts of authority figures seem often to have been summoned by excessive consumption.

The arrival of a ghost elicits more panic amongst a mixed group of drinkers and gamblers (which includes a cat) in this anonymous print from the early 1800s. Again, the unconvincing visage, dubious sheeted construction, and hidden presence of a grinning man intimates that this apparition is worldly in origin.

Finally, in this anonymous 1804 etching the ghost of a young woman visits a man sitting up in bed; the caption and accompanying ballad reveal that the latter is a sea captain and the former is the ‘unfortunate Miss Bailey’ who hanged herself after their short-lived romance. The guilt has driven the captain, who is surrounded by a pewter beer tankard and half-empty bottle of wine (which the text reveals to be ratafia, a strong sweet variety), to alcoholism, and it’s implied that the wraith is a figment of a depressed and chemically altered imagination. 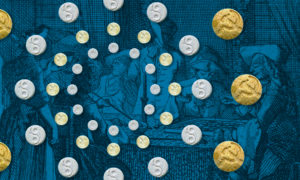