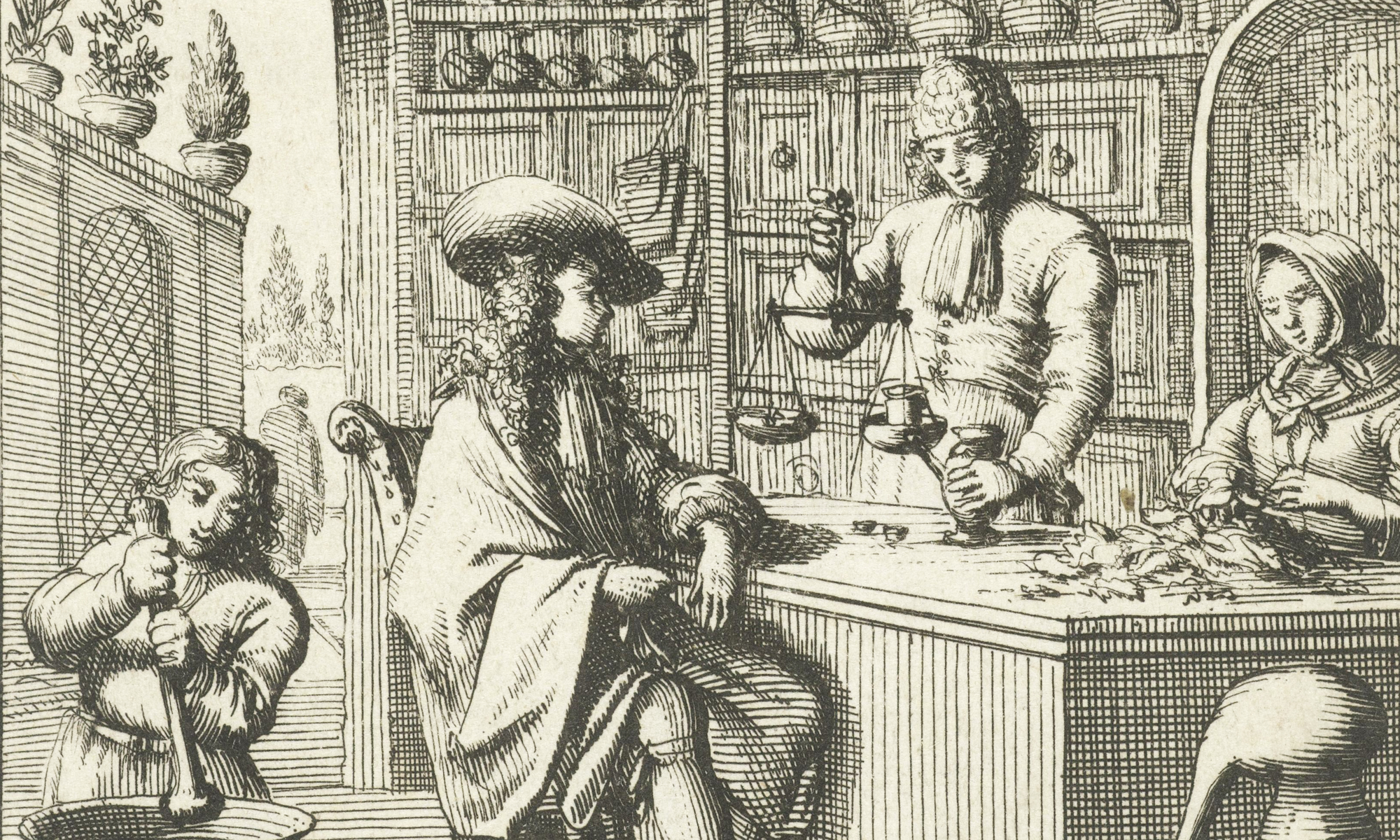 As such, the new intoxicants were aligned with and incorporated into existing medical beliefs and practices, which made them attractive to European consumers. Despite this key and interesting role of apothecary shops and Amsterdam’s status as a major staple market and financial centre between 1600 and 1850, little is known about the public function of pharmacies in Amsterdam. For example, were they also social spaces where people could gather to consume medicinal wares for non-medical, recreational reasons? In my master’s thesis, which was supervised by the project’s Stephen Snelders and Toine Pieters, I set out to answer this and other related questions by investigating the public function of Amsterdam’s early modern apothecary shops, both in its own right and in relation to the commodification of new intoxicants.

My starting point for investigating pharmacies in Amsterdam was their distribution across the city. According to theory, shops for daily necessities would have been spread out over the urban landscape whereas shops for occasionally needed luxuries were concentrated in several shopping streets. As comparisons to typical sellers of consumables and luxuries indicate, the location pattern of pharmacies bears most resemblance to that of retailers of daily necessities, such as bakeries. This is nicely illustrated in the figure below. This is an interesting finding since these frequently attended shops are more likely to have also been social meeting places which offered space and facilities for consumption of the commodities purchased. Another conclusion that can be drawn from this location pattern is that the apothecary’s products were mainly intended for the better off, since pharmacies are underrepresented in areas which generally housed the poor.

Of course, pharmacies being regularly attended – and primarily by relatively wealthy clients – does not necessarily imply that they were popular social spaces. One important factor in determining the likelihood of people gathering in a particular shop is the cultural reputation of the apothecary: were customers happy to be seen here? Contemporary literary sources indicate that this was not the case. This is underlined particularly expressively in a farce from 1646 that describes Hell as a place where apothecaries are crushed in a mortar until they start to stink, upon which their dust is mixed with urine and given to the doctors to drink. After all, there are no greater tormentors or murderers in the world than the medical practitioners…  Similarly, other texts frequently accuse apothecaries of malpractice. Based on these considerations, it seems unlikely that the apothecary shop was a popular or fashionable place to spend leisure time between 1600 and 1850.

Besides reputation, shop design can also tell us about social practices within the space. The many different sources I explored, such as inventories and images, indicate that Amsterdam’s apothecary shops were mostly furnished practically. One would find signs or merchandise on display in front of the shop, and the most prominent items inside were the counter, technical equipment, and shelves or cabinets with many kinds of bottles and jars. Apothecary shops distinguished themselves by displaying ornate containers such as Delftware jars with brass lids, and by the design and materials used for their furniture. Such beautiful items ultimately served to win the customer’s trust and to stimulate business. For example, the jars signalled that the apothecary’s wares were valuable, and exotic curiosities demonstrated his expertise with regard to foreign medicine.

Notably absent in the inventories of private apothecary shops are decorative items like mirrors and paintings, and comfort items such as chairs and tables. Some shops had a chair or a small bench, but this was only found occasionally. Moreover, the chair seems to have been primarily used by the apothecary himself and the bench probably seated only one person at a time. This corresponds with the daily practice within these shops as described in literary sources: clients did not usually wait inside the apothecary shop for a long time to get their ordered medicine. When the preparation of their drug took too long, they would simply leave and have it delivered at home.

Overall, then, we are left with the impression that the average apothecary shop was not a public place with an important social function. The lack of decoration and comfort was not very inviting, and – then as now – people did not seem to have much reason to stay there any longer than was strictly necessary. Should people want to hear the latest news or play a game, they would rather visit a tavern or coffeehouse that did provide comfortable places to sit.

The absence of comfortable furniture or an important social function also makes it unlikely that the apothecary facilitated the non-medical, recreational consumption of the new intoxicants inside his shop. Again, this is confirmed by inventories and contemporary literary articles that were drawn up between 1700 and 1850. For example, aside from opium, new intoxicants were rarely listed in pharmacies’ stocks, and some authors even expressed surprise that in other countries apothecaries sold opium pills on Saturday night, or served coffee. Thus, little evidence was found for the consumption of intoxicants in Amsterdam’s apothecary shops in that period. Unfortunately, it is harder to draw conclusions about the seventeenth century, for which fewer sources are available. It is known that the distribution and consumption of alcoholic beverages in the apothecary shop had been common until well into the seventeenth century, for example, but no clear evidence has been found regarding the accompanying social practices or the consumption of new intoxicants.

In conclusion, the social role of apothecary shops in early modern Amsterdam was limited to occasional meetings between customers, and no evidence was found for this pharmacological environment attracting social gatherings, or being central to the public consumption of new intoxicants. It seems that, despite today’s notion of Amsterdam as the drugs hub of Europe, the role of apothecary shops as intoxicating spaces was limited here. Instead, Dutch sources point to early nineteenth-century London as a place where apothecary shops were well-stocked with opium pills for consumption on a Saturday night… 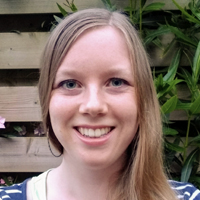 Annemarijn has a BSc in pharmaceutical sciences and an MSc in the history of science from Utrecht University. Her master’s thesis was a study of apothecary shops as public spaces in Amsterdam, c.1600–1850. She currently works as a junior project manager at UMC Utrecht.

A 1683 print by Jan Luyken showing the interior of an Amsterdam apothecary's shop (Rijksmuseum, CC 1.0 Universal) 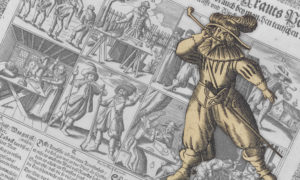 A Matter of Measure: Tobacco in Seventeenth-Century German Satire
A German broadside published in 1658. Eight vignette etchings and…