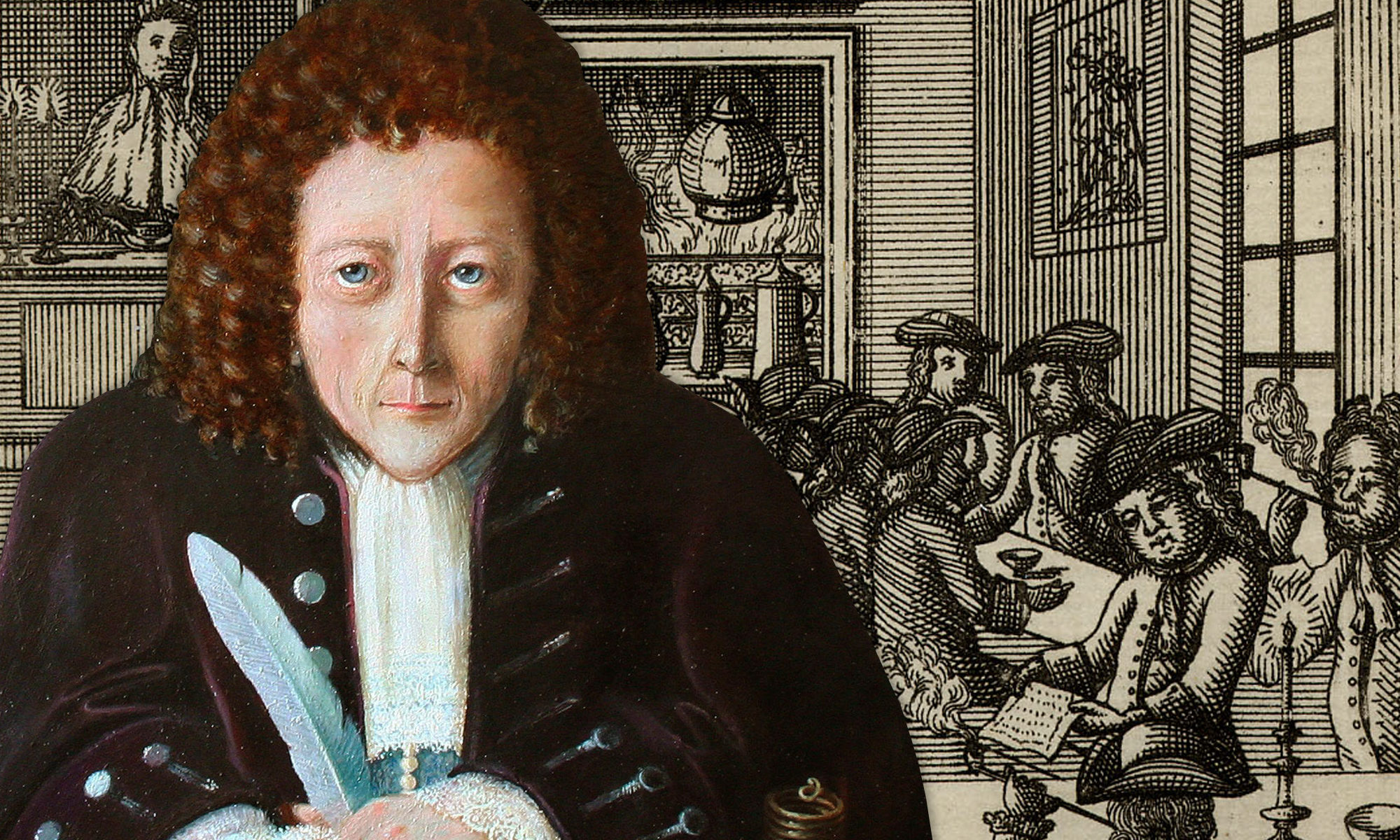 An interactive, data-driven essay co-created by James Brown and Connor Plunkett and Agatha Yates from the MA programme of the Department of History at the University of Sheffield

While still somewhat in the shadow of his better-known contemporaries Robert Boyle and Isaac Newton, Robert Hooke was one of the most significant scientific figures of Restoration London. He simultaneously and variously plied his trade as: experimental philosopher (where he specialised in astronomy, mechanics, microscopy, and pneumatics); Professor of Geometry at Gresham College; Surveyor of the City and chief architectural assistant to Sir Christopher Wren; and Curator of Experiments at, and then Secretary to, the Royal Society. He was also a committed diarist, beginning a journal at the age of 36 on 10 March 1672, and creating entries on a near-daily basis for the next decade (he also maintained a briefer and more heavily abbreviated memorandum book between 1688 and 1693). The diary blends meteorological observations, current affairs, reports on experiments and instruments, and descriptions of meetings with friends and colleagues with an almost obsessive concern with his own well-being; as Lotte Mulligan has observed, Hooke ‘turn[ed] his gaze upon himself as if he was one of his own microscopical specimens’, and was especially sensitive to the effects of external factors like weather and diet on his physical, mental, and emotional health. As part of this physical accounting Hooke carefully recorded his daily consumption of alcohols and other drugs, making his diary a brilliant source for the history of intoxication, as well as for the history of science and the minutia of daily life in the seventeenth-century metropolis.

By the time he started his diary, perhaps influenced by his natural tendency to melancholy and the stress induced by the often-competing demands made upon him by clients, employers, and patrons, Hooke had developed what Lisa Jardine has termed a ‘sophisticated system of mood and pain management… through a regimen of regular drug-taking’. Intoxicants loomed large in this schedule, and he consumed the full range available to early modern Londoners on a habitual basis. He regularly enjoyed alcohols, especially ale, beer, cider, wine, and distilled spirits. He also experimented with the colonial drugs newly available from America, Asia, the Levant, and the Mediterranean: he was an avid consumer of chocolate, tea, and (to a lesser extent) coffee; frequently took opium (‘syrupe of poppys’) and its medical preparation laudanum, mainly to alleviate the anxiety and insomnia from which he suffered throughout his life; and was hopelessly addicted to tobacco, from which he had several unsuccessful attempts to swear off. By 1689 he was even dabbling in cannabis or marijuana, brought back from India by his seafaring friend Captain Robert Knox, which he described as a ‘strange intoxicating herb like hemp [which] takes away understanding and memory for a time’. Hooke used these substances, individually or in combination, to lubricate his sociability as well as for therapeutic self-dosing, and clearly believed them to have a beneficial effect on his disposition, most usually couched in the language of ‘refreshment’.

Hooke was also a habitue of the spaces associated with these novel commodities, especially the still relatively new institution of the coffeehouse, which structured his social and professional networks. Invariably, after a solitary morning of experimental and mechanical work at his suite of rooms at Gresham College on Bishopgate Street, Hooke’s afternoons and evenings comprised an ‘energetic rush’ or ‘frantic circulation’ through coffeehouses, especially Garraway’s and Jonathan’s. These were the places where the outcomes of experiments were disseminated, books, papers, and specimens exchanged, and – on occasion – experiments themselves were conducted, as on 15 November 1679, when Hooke dissected a porpoise at Garraways’ (‘opened fish at Garway’s’); as Steven Shapin and others have observed, they were as central to his vocation as the apothecary’s, the instrument maker’s shop, the meeting rooms of the Royal Society, or the private laboratory. Perhaps alarmed by his own breathless record of coffeehouse assignations (and the considerable expense they represented), on occasion Hooke had unsuccessful attempts to go cold turkey, as in April 1674 when he ‘[r]esolved against coffeehouse for the future’. He was back at Garraway’s two days later, and made 2,162 further visits. Ironically, as Phil Withington has recently observed, Hooke’s intoxicant of choice at coffeehouses was not always coffee; he was equally as likely to order chocolate, tea (he reported drinking five consecutive dishes at Jonathan’s on one occasion), an alcohol, or a small meal like buttered toast.

The following attempts to place these introductory insights about a hooked Hooke on a firmer empirical footing. We have captured all 3,173 individual instances of intoxicant use reported by Hooke in his diary, recording the intoxicant in question, as well as the date, time, and location of consumption; the resulting database forms the basis of the following visualisations, created with the free data exploration software Tableau. We have extracted information from the 1935 print edition of Hooke’s diary prepared by Henry Robinson and Walter Adams (which transcribes material from the period July 1972 to January 1681), and the addendum subsequently published by Felicity Henderson in 2007 (which transcribes remaining material from March to July 1672 and January 1681 to May 1683, excluded by Robinson and Adams on the basis of their ‘[in]sufficient importance’). The original manuscript is now in London Metropolitan Archives (CLC/495/MS01758), and is available online. A later, less full, and more heavily abbreviated journal covering the period 1688 to 1693, now in the British Library (Sloane MS 4024) and transcribed and published by Robert Gunther as part of his Early Science in Oxford series, has been excluded from the analysis.

This map shows the location of the intoxicating spaces visited by Hooke across the course of the diary. It includes places ostensibly dedicated to intoxicants (i.e. the coffeehouse or the tavern), or where Hooke recorded consuming them, colour-coded by establishment type. His drugged ambits extended across the environs of the built metropolis, but almost never beyond them, unsurprisingly as he seldom left London. He overwhelmingly visited, and consumed intoxicants within, coffeehouses (marked in pink) and taverns (marked in green):

This map, showing the same establishments but now weighted by the frequency with which Hooke visited them, reveals his spatial logic even more clearly; although he occasionally struck out west (especially to visit Child’s or Man’s coffeehouses), he overwhelmingly patronised the cluster of establishments within striking distance of his lodgings at Gresham College, especially Garraway’s (1,274 visits) and Jonathan’s (545 visits) coffeehouses on Exchange Alley in Cornhill, represented by the two largest circles:

Types and Names of Establishments

Hooke’s use of different kinds of intoxicating spaces is shown more clearly by this this chronological heat map. Coffeehouses, to which Hooke made a total of 2,637 individual visits over the course of the diary, remained king across the period, followed by taverns, to which he made a comparatively small total of 234 individual visits. Most of the remainder of his consumption took place in private residences, either in the houses of friends and colleagues, or within his own rooms at Gresham College:

On many occasions Hooke recorded the names of the establishments he visited, meaning his institutional allegiances can be reconstructed at a more granular level. This this chronological heat map shows his shifting preferences across all kinds of establishment; inter alia, it shows that his favourite tavern was the Crown in the Royal Exchange, and that while Garraway’s was Hooke’s favourite coffeehouse between 1672 and 1676, when Jonathan’s opened later in the decade it supplanted the former within his affections.

This proportional bubble chart shows the intoxicants Hooke reported consuming across the course of his diary. Perhaps surprisingly, chocolate looms largest, followed by the ‘traditional’ fermented beverages of wine, ale, and beer. After that, his favourite new intoxicants were tobacco, then coffee, tea, and opium:

This stacked bar chart shows the types of setting where Hooke explicitly reported consuming intoxicants, subdivided by substance; he overwhelmingly enjoyed them in coffeehouses, followed by private residences, and then finally in taverns. The coffeehouse bar confirms Withington’s findings that, when in coffeehouses, Hooke was not guaranteed to drink coffee; he was far more likely to order chocolate, wine, or beer, and equally as likely to drink tea or smoke tobacco. He exclusively took opium at home:

Finally, this stacked bar chart shows the days of the week on which Hooke reported consuming intoxicants, again subdivided by substance. Characteristically and expectedly, his habits were a daily occurrence, although he was slightly more likely to enjoy them on a Tuesday or a Saturday (he generally rose late on Sundays), and was least likely to indulge on Mondays, the first day of his working week proper. There are also some intriguing patterns per individual intoxicant; he was most likely to drink wine on a Thursday, for example, or to smoke a pipe and take opium on Tuesdays:

A 2004 imagining of Hooke by Rita Greer, based on contemporary descriptions (Wikimedia Commons, Public Domain), superimposes a seventeenth-century etching of a coffeehouse (British Museum, CC BY-NC-SA 4.0)